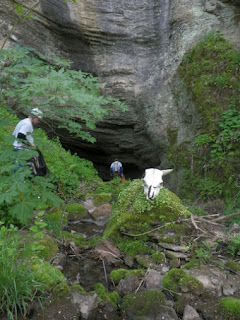 We entered the cave around 10:30am Saturday 21 April. So much for leaving Tanya’s by 8am. There were eight on this trip. Myself, Dave Ticehurst, Ava Pope, and Brian Williams comprised survey group G while Dave Duguid, Jacob Jackson, Martin Groenewegen, and Ken Walsh comprised survey group H. There was an 80% chance of rain going into the weekend, but the sky was beautiful, warm and sunny when we entered. Regardless, the chance of rain would haunt me all day as this cave begins at an insurgance and has flooding potential.

My team was the first to enter while survey group H did a little surface walk to try avoiding a total traffic jam in the entrance crawl. Either we goofed off to much at the entrance, or the others following were too impatient, but they caught up to us around the awkward 30 degree sloping crawlway to heaven. The crawl for myself was made more awkward then normal because beyond my normal survey gear I was hauling my vertical gear and 150′ of 11mm rope by my ankle up that crawl. Next time I haul anything through that crawl I plan to wear a harness to allow me to drag my pack by hips. My gear dragging leg was a bit worn out after the crawl haul.

At the F10 junction room the teams parted ways and we began surveying to the fabled “vertical” section. The first shot out of that room was an awkward 10′ shot at minus 33 degrees into a squeeze. Not an easy shot for Dave’s first, and Ava’s second survey trips. They did a good job though and improved as we got deeper into the cave. When we came to the vertical section, Dave D. had suggested we turn around, and go to one of our other leads, but Brian didn’t hesitate to cross the traverse. Part of the goal for this trip was to acess the quality of the old bolts and install new ones if necessary. When Brian crossed, he used the old rope already in place while I used a munter hitch to belay him across. When he determined the bolts were safe, we tied the new rope off at both ends to provide redundancy to the questionable original rope. After setting the rigging, Brian helped both Dave and Ava construct makeshift harnesses and cowstails so we could cross the ~18′ pit. Dave, Ava and I continued surveying in our first walking passage of the day while Brian dropped the pit to see where it went. The other side of the traverse was worth the gear haul. Our first walking survey passage of the day, some nice formations, and an excellend lead can be found on the other side of this traverse.

We exited around 10:45pm. The other team had apparently left a couple hours earlier, leaving us a note in the junction room. By leaving early, they dined on Mexican food, while we were stuck with Sonic. Brian drove home that night and hopefully got some much needed rest. We stayed up rather late inputting data so we could talk stats and gawk over how much the cave grew. Thanks to everyone who joined this trip. Dave and I will let everyone know our plans as soon as we select a date for the next trip. Perhaps then we will have the fabled three survey teams we’ve been dreaming of.

Pictures taken by Brian Williams with a simple point and shoot camera:

We grabbed another 452 feet of cave surveying last weekend. It was cold outside, but awesome inside (if you have a stomach for tight places)! I can’t stop thinking about this cave, it’s driving me crazy. We have three good leads right now that need to be surveyed, and a fourth crawl way that needs to be cleaned up. One of the leads has a set of bolts and an old rope rigged, as a traverse across and a visible 15’+ deep pit we couldn’t see the bottom of, so vertical gear will be brought on our next survey. If you are not vertical, that is okay as the other leads are horizontal. As stated previously, the cave does require some low belly crawling, but nothing extremely tight. Ken was concerned he might not fit before we started the trip, but he had no problems. Our next survey date is currently undecided, but it will be in April although I’m not sure I can wait that long. If you’re interested in joining us please don’t hesitate to talk to me about participating. There will be an email on the mailing list and a date will be posted on the Google calendar when we make a decision. If you don’t want to survey, but have an interest in digging, there is also an interesting digging option in a section of the cave we opened up on our trip last November.
Tanya’s house was awesome. She was a very gracious host, but don’t leave your sleeping bag out on the floor while you go caving. Bad things will happen. I learned this the hard way.

Weather: Cold, snowy – expecting this Dave and I both drove our 4wd vehiclesData Recorded in Marion:Saturday – High 33 Low 12, wind gusts up to 40mph, snow fall up to three inches. Brrrrrr!
Sunday – High 27 Low 11, less windy, and sunny so it felt much nicer. Most snow gone.

Here’s some data and pics for your enjoyment: 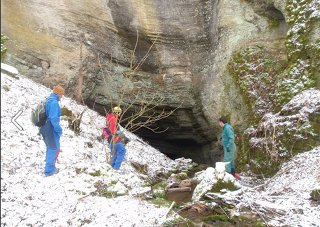 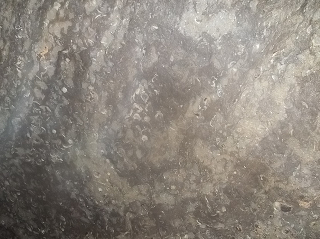 The shell pics were taken by Martin Groenewegen and the pics outside the cave were taken by Matthew Weiss. These ceiling fossils are densely clustered in this layer and continue in the walls and ceiling off in an un-surveyed direction.