Elise took the train to Pennsylvania to go caving with friends there. As guides at Laurel Caverns, they have access to the otherwise closed cave. Laurel Caverns claims to be the state’s largest cave, but that’s not enough, so they spent four hours digging for more.

Michael M. reports signs of traffic in and around Hancock Cave. He found some trash as far inside as the Funnel Tunnel, and shoelaces tied together leading down the Breakdown Staircase (I have so many questions). He also noticed evidence of trail upheaval outside, leading to the entrance.

Michael has been doing some TAG (Tennessee-Alabama-Georgia) caving.

Martin ventured under his house a few times. Rob watched a cat come down out of a tree.

Ken says the map of Big Sink Cave is nearly finished. He thinks maybe one more short trip is needed.

Without encouraging or discouraging the act of caving during this pandemic, Michael M. pulled together some current information from the websites of the states that most often host our caving trips. We also briefly discussed the following considerations.

We discussed program ideas for the year. Taylor has created a sign-up sheet at the following link. Those interested in giving presentations can select which month they prefer. https://docs.google.com/spreadsheets/d/1h1g41PL0sBIV4ZQcmayyqJVyiTsT1cNkw3aydze1cwM/edit?usp=sharing

This year the grotto will be offering an incentive for participation. Prize tbd. Point system as follows:

In addition to the Hancock Cave trail construction, Michael McBride suggested a trip to the NSS Headquarters in Huntsville, Alabama to do whatever volunteer work is needed. Camping and caving are available onsite and very nearly onsite.

When the request came from James River Grotto for people who were willing to lead trips in Smyth County, I (eventually) stepped up to lead a trip to Hancock Cave. Why Hancock? First, I know my route through the cave. Second, with the help of some other TriTrogs, I’m leading a group of Girl Scouts there in a couple weeks and didn’t mind an opportunity to check on the condition of the entrance.

Due to a communication breakdown, Hancock wasn’t among the signup sheets that were put out at 10pm Friday night. I was kind of bummed, but I knew there were enough TriTrogs interested to make a full trip happen anyway. The apologetic VAR staff made a signup sheet in case anyone rolled in early Saturday looking for a trip. Saturday morning six of us stopped at registration to discover that a big bunch of people had signed up – wheee! We rearranged ourselves into two groups – a group of six (including and) led by Kim and Lisa and a group of eight (including and) led by me and Diana.

Kim’s group arrived first, and they rigged the entrance with both a handline and a cable ladder. The ladder was useful on the way in and necessary on the way out. Water poured into the entrance room through several cracks in the ceiling and along the left wall. A guy in my group declined to use either the webbing or the ladder and slid about 30 feet coming in. Wheee! He wasn’t hurt but busted his pack open and spilled its contents in the process. We spotted two salamanders, one Eurycea lucifuga, one only an inch and a half long, dark (Green? Black?), with a pale stripe down the back and some number of toes. No bats.

We were still in the Grantham Room when we heard the first group above us at the Overlook. Our group was moving slowly and two of them would likely have trouble navigating the Toilet Bowls. When we got from the Overlook back to the Octopus Room it was clear that those two would be challenged by anything deeper in the cave. Diana agreed to escort them out so that the rest of us could continue.

After the Breakdown Staircase, we caught up with Kim and Lisa et al at the Comic Book Hole. They had all gone through! Wheee! I was the only one in my group who made it through despite others’ efforts; I clearly should work on my cheerleading skills! That said, it was good that we didn’t waste too much energy there since we all wanted to make it out of the cave, and preferably in time for dinner.

Back at the entrance, everyone made use of the cable ladder. There was a little trouble once it got tangled up with the handline, and it kept sliding into a crevice on the right. We remedied that by having one person wedge himself in on the left in order to hold the ladder in place. When we all met back at the cars, I learned that Diana had assisted her cavers with some photography on their way out, which (based on the smiles on their faces) helped make their trip worthwhile.

My thanks to the considerable efforts of Diana, Kim, and Lisa for salvaging this into a fun, successful, safe trip! Thank you so much! And, bonus, we made it back in time for showers before dinner!

On August 25 we will visit a cave in Lee County, VA. We will have an affordable nearby campground reserved for the nights of August 24 and 25. Some brief details about the cave follow. Please complete the signup survey linked below [Removed].

This will be a horizontal trip; no vertical gear needed. I always recommend knee pads. There are some long, low crawls, but they can be bypassed. Much of the cave offers walking passage. How wet you get will depend on recent rainfall and whether you reach the stream passage. Wetsuits aren’t needed, but you will appreciate waterproof boots.

This cave is appropriate for all skill levels. Attractions include waterfalls, gypsum, salamanders, weird formations, mountains of breakdown.

If you want to go on this trip and you haven’t already signed up, please send me an email (chair@tritrogs.org).

Just a few pictures from the May 12 Girl Scout trip. They did an impressive job of removing graffiti and picking up trash and were rewarded with some fun, muddy caving and eye-catching formations. Pictures taken in the “outer” mine area might show people without helmets or gloves. 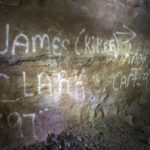 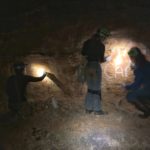 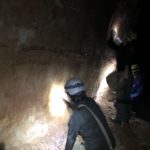 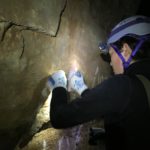 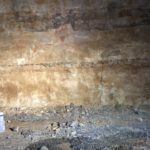 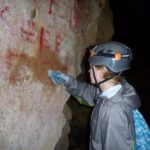 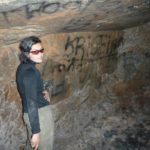 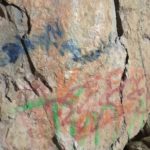 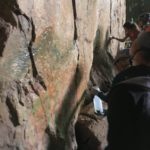 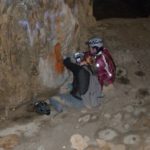 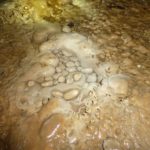 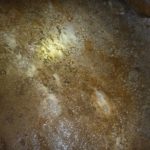 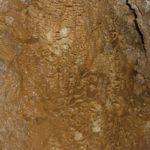 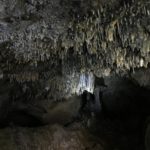 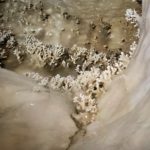 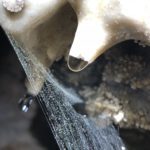 After the painfully frigid dampness of Dutton’s, Dave Duguid, Ken Walsh, Jason Lachniet, and I strolled along the sunlit field over to Radon Cave. It didn’t take long to find out that Ken wouldn’t fit through the entrance crawl. We traded him a shovel for a cable ladder and left him behind.

When we reached the junction where the old traverse was, we were shortly joined by the grunting and hissing of a groundhog. He retreated down a side passage, but his stench lingered while Dave ascended 25 feet and rigged the cable ladder. After yet more belly crawling, we reached the pinch and the reason we’d brought along the hammer. Without Ken, extra tools were unnecessary, and we slid out into the Big Room effortlessly.

At first, it just looks like a big room, and I was so grateful to be standing up that I soaked it in. Then Dave told me to climb the small breakdown pile, and from there, it’s clearly a Big Room. Jason set stations, bouncing from one wall to the other until we reached the far end of the room, occasionally noting the faded carbide station markers from a previous survey. We surveyed a total of 300 feet. The ceiling height maxed out at 75 feet. We eyeballed a ledge about 15 feet above the pinch and agreed that someone could free climb most of the way and reach it with a few bolts. The only remaining leads would be high ones that are only visible and accessible from up there.

In the big room, we saw one live bat, one isopod, and the decayed remains of one groundhog-sized critter.

While we were surveying Ken enlarged the entrance crawl, and getting out was a breeze. At least, it was less miserable than it would have been.

What would you do if you won the lottery? I think we all now agree that we would help Michael realize his lifelong dream of swimming through a silo full of coins.

Officer elections took the place of a meeting program. The 2018 officers are:

Ken talked about several caves in the Virginias that are owned and managed by groups of cavers.