I’ll start by thanking Ken Walsh for setting up this trip. It was my first proper photo trip, and I feel like I created some really good content while in the cave. After spending the night at The Bat Ranch, we had a group of seven total that went in Tawney’s Cave on Saturday, July 28. After sorting through gear and deciding which lights to take, Ken and I entered the cave through the Formation Room entrance. We started setting up a shot, and the others followed shortly. 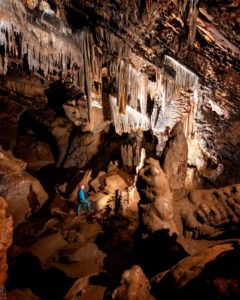 Ken modeled in this first one, and I liked the outcome of it alright, although I cropped it quite a bit from the original frame. The original was actually a landscape photo extending much more to the right, but the formation you see in the foreground was dead center in the frame. After this photo, we moved to a lower section of the Formation Room. 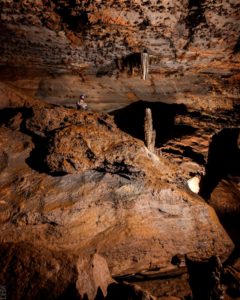 Mark DeWitt climbed up high for this one, and I really like the scale that having him up there demonstrates. We then moved to the back of the Formation Room, where the stream can be accessed. 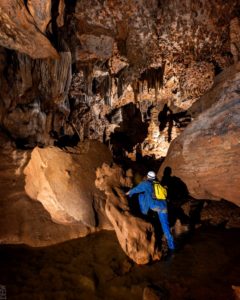 Dan LaPasha stood in the stream for me this time. In this photo, we are looking back uphill towards the entrance. I wish I had lit this one a bit differently in the foreground, because I would’ve liked more texture in the surface of the water. That said, I like how deep you can see into the room from this angle. From here, we carried all the gear into the Moon Room, which doesn’t have much in the way of formations, though there still are things of interest. 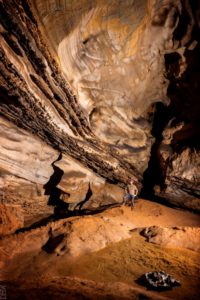 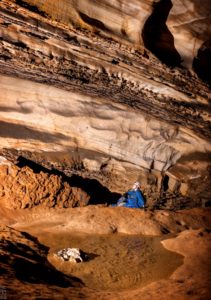 I took two photos showcasing the ceiling here, the first featuring Matthew Lubin and the second with Dan. I experimented with the water some more here, and though I like both photos, the first one is my favorite of the two. We moved a little further into the cave and took a few more photos, but I admit I don’t remember any room names after the Moon Room. 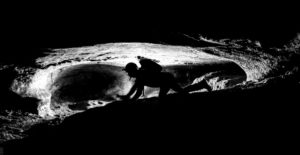 This photo, with Matthew modeling, was just an idea I had when we came upon this little spot. There wasn’t actually much crawling required on this trip, but I thought it would be a cool idea to illustrate it nevertheless. Above this hole is one of two paths to the sinkhole entrance at the rear of the cave. I grabbed one more photo before heading that way, though. 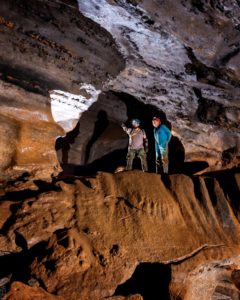 Mark and Ken stood in for this one. The hole in the crawling photo is just below and to the right of what you see in this image. By this point, I had started to get pretty worn out from all the camera gear I dragged along – even with the help of others carrying strobes for me. We continued on to the sinkhole, although we went there via the other route which requires climbing over the decaying cow carcass. I left my gear behind as I was fairly tired at this point. After spending a few minutes in the sinkhole, we returned using the originally planned route that avoids the cow. I grabbed my gear and we began the journey back. There was a fair bit of walking that had to be done in the stream through some passages in the cave, and I had one last idea while doing so. 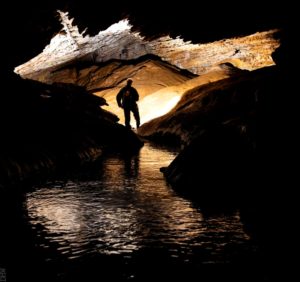 Dan was carrying one of my strobes, so I had him turn it on and aim it ahead of himself. This shot was quick and dirty, with me not even bothering to use the tripod. I just crouched where I stood in the stream to get as close as I could to the water without falling over and in, and got a shot I wasn’t ashamed of in only a minute or two. With that, I packed up and we continued back to the Formation Room. We had considered checking out the Sump Room on our way out, but I was really feeling the weight of my gear by this point. We exited, locked the gate, and got back to the cars. As I removed outer layers, I realized how much my new boots, suggested by Ken, worked in this cave. I had planned on bringing my usual caving boots which are just “waterproof” hiking boots, but I forgot them when Dan and Ken picked me up. We ended up stopping at Walmart to pick up some new ones, and after trekking through the stream with all my camera gear, I was very glad to have the wellies that I purchased. I considered this trip to be a success, both in that I learned a lot about cave photography and in that I am proud of what I was able to capture through my lens.

Not pictured are Matthew Weiss and Michael Caslin, who were also on our trip. I want to thank everyone for being patient, carrying gear, and modeling for me on this trip.