Given only two weeks notice on the heels of convention and a well attended grotto trip, led to limited interest in the fifth trip to Cold Sink since our survey began last November. I had a few people on the fence for this trip and ultimately most everyone backed out leaving only myself, Jacob Jackson, and Jason Schomo. This would make it the first Cold Sink trip that didn’t field two teams. Lucky for us, we got the easy survey.

As seems usual we had a slower start to the day than I would have liked; both in getting to and getting started once in the cave. I blame the slow start partially on staying up so late with Tanya. There is always way too much to talk about when visiting her. When we finally got to the cave I was slow in trying to analyze how much water had been in there since our last visit. At the cave, bent over plants and debris on the fence showed signs of recent high water. There was also evidence that significant water had been flowing in the first series of low crawls. Later at the traverse pit there was foam about a third of the way up the pit also deposited by recent waters. Also, the stations in the lead below the crawl way to heaven had unfortunately been washed further into the cave.

Because we were such a small group I decided this was my time to check that unfinished lead early in the cave. There was a gravel pile built up behind the log that was once a survey station, so I spent a fair amount of time digging it out so I could fit through. Once through a tight spot I got into a space that allowed plenty of room to turn around. There was another low squeeze that opened into another small room which had water flowing through it. Up stream looks like a hopeless dig, but downstream continues tight in more passage like what I’d just pushed through. The big difference was the mud downsteam was highly water saturated, with the stream disappearing into the mud. After sitting in mud which enveloped me, chilling my butt and thighs I concluded the passage was something to save for a dryer day. Like the next trip perhaps.

After I worked my way back to the base of the crawl way to heaven I took some time to catch my breath and ponder about the wisdom of our decision to cave that day. The weather forecast looked safe, but there was still a 30% chance of light rain last I checked and the surface ground appeared super saturated. I began to wonder if I got such a large turnout on this trip because bad things were fated for us. After rolling the thought around in my head I made the decision to do the hardest part of the cave and re-think our plan after arriving at the recovery junction. Of course once we got there I decided to keep caving.

Upon making it back to the room where the K survey had finished, our first objective was the side lead with a drop I thought was climbable. We used Jacob’s ~50′? of webbing as a handline rigged far back from the drop and did the 14′ down climb into a small room just below a flowstone cascade. Off this room we left another lead with a pit that had a narrow down sloping entry which prevented us from seeing the bottom. It didn’t sound deep, maybe 10′-15′, but it also appeared too wide to be climbable. I think I’m going to want vertical gear to check the bottom of this one.

Once back in the main room we had two choices to pursue. A high lead that was unvisited, and a low lead Robbie had crawled into on the previous trip reporting it went. We opted for the high lead. It was certainly the easier choice. It was easy to navigate and opened into larger passage. In this passage we found what we were calling an ‘ax’, but a later internet search would more accurately describe it as a mattock tiller. The mattock had certainly seen better days and we would now consider it part of the cave. 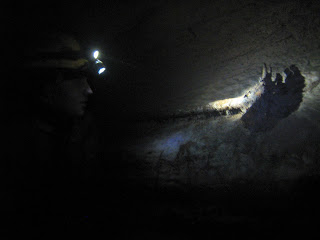 It was here that Jason and Jacob tried to give me a 62′ shot, but I made them cut it in half so we could have a good tie in for the lower crawl passage we’d passed. Near the end of our survey for the day, we got into a larger room which seemed to stop our progress. For a few minutes we walked around stunned to think we were at the end of the cave. In one location there is a depression in the floor that certainly drains water, but the cave just seemed to stop. There was a small lead under the area we climbed on to get to the floor, but it didn’t look too interesting on the first pass. Since we seemed to be running out of options I decided to check it again. I did the crawl and it opened up into another room. It goes! I walked into it about 20′ then turned around to save further discovery to those who earn it through survey. Unfortunately I didn’t bring my camera into the new section of cave. I guess you’re going to need to come on the next survey trip to see what it looks like.

Since we’d planned to return to the Triangle that same evening, we decided to leave the cave earlier than any of us really seemed ready for. That day we set 15 survey stations with an average of 20′ per shot giving it the longest average shot length of any previous team. This wasn’t standard Cold Sink survey as we didn’t survey in a single crawl!

I need to thank Jacob and Jason for coming on the trip. This was Jacob’s second survey trip, his second trip into Cold Sink, and his first time setting stations. He did a great job! Jason is new to the caving, but was also a great asset to the team. I started the day making bets against the accuracy of their first shot because it had a steep angle, but their compass readings matched on the first try! I hope they are both around to continue caving with us for a long time.

Finally, Ava should know that on the way out we saw a cave salamander at the bottom of the wedgie slide (crawl way to heaven). For a creature that never appears to manage more than a slow crawl, he was amazingly fast as I coerced him to leave the drop zone.

Erata: Used my new disto for the first time on this trip. Very nice. Also, as a word of caution there might be chupacabras in the cave now.