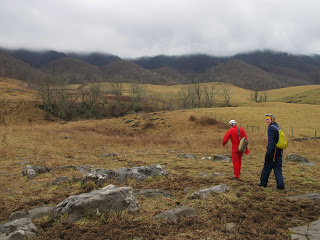 Going into this weekend I was stoked. I
had noted 14 potential surveyors, 12 of which I considered committed
by the time we were driving to Marion. I was stunned when all 14 showed up! With that
number I was essentially forced to make 4 survey teams surpassing my
long standing goal of 3 teams in the cave. Everyone was pretty
timely, the biggest delay coming from my explaining to all the teams
who they were going to work with, and what leads they were going to
work on. Lesson learned. Let’s hope I have that challenge of
coordinating lots of surveyors again many times in the future.
Because there were so many of us we
staggered teams going into the cave . Early on Jason Schomo had a
zipper malfunction which delayed us a bit, but we otherwise made very
good time. The conditions in the early part of the cave were the
driest they’ve been since the first survey trip. At that time we only traveled a
short distance into the main crawls of the cave. These conditions made moving
quicker and easier not only because the mud did less to impede us,
but it seemed the mud balls we’d rolled pushing through the crawls on
previous trips served like ball bearings as we slid along the floor.
If anyone was bothered by the crawls on this trip, I didn’t hear it.
Okay, maybe Ken complained, but that doesn’t count. Mark Daughtridge actually commented multiple times that the crawls were much nicer
than he expected, suggesting they were much nicer what we went through
on our Worley’s survey trip back in November.

We didn’t have a long list of leads for
the cave, but we had enough for each group. Each team started in
their respective section, but the teams were never far from each
other. My team started with the two vertical leads we left last time.
The first one didn’t go anywhere, but shockingly the second did. My
team ended up getting over 100′ down there. As we neared completion of our survey of this level we felt we
were close to known walking passage so we sent Jacob out to look for
the connection. We made the handshake connection, but Jacob never
returned. Instead he choose to spend the time chatting with another team. Dave
and I were a bit annoyed by this, but it turns out that that nice
walking passage we’d left them with ended fairly abruptly after 6
stations. When Dave and I returned to the group after wrangling with the
short yet quite bothersome drop, we had a few snacks, and rallied
the troops to seek out the other teams.
When we found Dave Sockey’s team, they
were just finishing up the survey of their passage. Knowing the final team had the most promising continuing lead, I  led everyone toward where they were located. When I finally
reached them after a surprisingly long descent, I was told they had
two more stations and then they’d be done.
I was shocked.
This meant there were no more
non-digging leads left. It was still afternoon at this point, so a
few people poked at some of the plugged passages we’d encountered,
but found nothing. Fully expecting to have a few more CS trips to
line up I was left with a confused empty feeling. We did some rough
estimates as this point and realized we were going to be just shy of
my goal of mapping a cave over a mile long. My team was the last team
out, and I moved a bit slower than I did on the way in. I’d spent a
lot of time in the cave and I felt a bit like I was saying goodbye.
I guess now we just need to find the next big one.
If you missed this last real CS survey,
but still want to get into the cave, I’d like to plan another trip to
get some final clean-up data for the map. Let me know when would work
best for you.
Some statistics for the cave as we now know it:
Included survey length = 5103.6 Feet
Higest station = 31.9 Feet above
entrance station
Lowest Station = -110.7 Feet below
entrance station
Cave Depth = 142.6 Feet