It’s been more than a week since the last CS trip and I’m still riding high. The prospect of running a survey project in an ‘unknown’ cave starting from zero feet that pulls in over a mile of surveyed cave is just too exciting. On this last trip we pulled off 1017.2 feet surveyed. I tried to plan far in advance to build interest in this trip, but somehow I still managed to only pull out two teams. I’d emailed with Brian Williams a few days before the trip convinced we still could pull off three teams, but there were a few late bail outs which left us with only six surveyors. I was not too concerned though. The weather was looking good, and we had a good set of experience participating in the trip so I had high hopes we’d make good use of the weekend. I was not expecting what we found.

After the last trip I knew the cave continued but we had a number of leads to knock off before we could get started on the lead which had potential to extend the total cave length. My first goal was a nagging lead below the crawlway to heaven. On the last trip I finally got around to poking my head into this often passed lead and in so doing I decided the passage was in need of surveying. It would be a small two man survey, but I felt it needed further investigation. There was also a pit discovered on that trip which had an inaccessible bottom. We’ve done a good job of cleaning up our leads as we go so these got first priority.

With that small crawl in mind for this trip I divided our six cavers into the following teams. Myself, Jacob Jackson and Buford Pruitt on survey group ‘N’ (aka the Ninnies), and Ken Walsh, Brian Williams, and Stephanie Petri in survey group ‘M’ (aka the Monkeys). Stephanie had come with Brian and was new to surveying so I wanted to keep them together with someone who’d had some experience in the cave making Ken a natural choice. Of those signed up I figured Jacob was probably the most masochistic and likely the only one willing to help inspect the low crawl, so he ended up on my team. Surprisingly it took very little begging for me to get his assistance. Unfortunately Jacob was also the only other person on the trip who’d been past the pencil junction which meant the monkeys only had a vague idea where they were going. I really should have given them a copy of the working map.

When we arrived at the cave on Saturday morning around 10am, the monkeys headed in first followed by the ninnies. In the first room we noticed a bunch of harvestmen gathering on the ceiling, some cave crickets, and a small cave salamander. I even managed to convince the salamander to crawl up onto my hand for a brief moment. I might have damaged him before saying hello had Jacob not warned me of his location. He seemed mostly ungrateful if not perturbed by our luminous presence so we crawled on. We continued down the passage eventually reaching our starting point where we were blessed to hear Stephanie and Ken still working their way through the crawlway past the crawlway to heaven. (We really should name that passage. As it really is considered separate from the crawlway to heaven. Any suggestions? I think ‘Pergatory’ might fit nicely.) While we surveyed Buford worked on creating profile sketches of the cave since there was no room for a third where Jacob and I would be working.

That low crawl was boring, but it still has a soupy wet tight lead at the end of it. If the cave is ever really dry it would be cool if someone poked their head down it, but I’d suggest making the attempt as a group of two so there can be a backup to extricate the brave if they get stuck. There are a number of down sloping hard rock pinches on that side of the cave so I assume this will probably end the same. For this reason I don’t feel this is a lead that really needs much more pushing.

When we finished that section of survey we joined back up with Buford to eventually stop at the traverse pit to take some exact measurements of the pit. We measured 18’ from the lip just as we’d estimated, and 15’ from the lip of the nearby pit, a few feet deeper than originally thought. We then cut the excess rope we’d stashed at the traverse, and stuffed it into an extra pack I’d carried. Jacob, ever the masochist, volunteered to hauled it to the delay chamber for us. I would have hauled the rope, (really I would have) but from this point I was the only one carrying my vertical gear as the others would leave theirs behind at the traverse pit.

We worked our way through the  cave eventually arriving at the delay chamber where we would again be slowed down. We bumped into Ken’s group who’d surveyed a crawl back to that room while we rigged to drop into the nearby chimney and subsequent pit. We took a while to find something solid to rig to for the unexplored drop, but once we did I was on rope and peering down into a a 6’x8’pit that was 11’ deep from the lip. It was about what I’d expected having thrown a few rocks down the slopey squeeze to get to it. My only hope was for the possibility of a multi-drop, but the bottom of the pit drained out in a small uninteresting looking hole. Bummer. The one novel thing we did here worth mentioning is the way we protected to rope over the sharp rocks the rope must cross for the drop. Buford’s volunteered on of his external knee pads to pad the rope which we attached to the rope using a small prusik I always carry with me on my harness. It worked out very well.

Eventually, we escaped that boring lead to find the monkeys now working their way through the crawing lead at what was then the back of the cave. With no real leads to survey in the cave before that point, I broke out some line plots of the profile and had my team start sketching profiles. Ken suggested that we finish their next couple of crawl survey shots so they could start in the subsequent walking passage, but I declined thinking our time would be better spent working on profile sketches. Boy was that a silly decision. 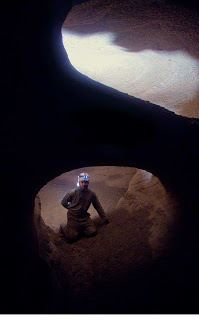 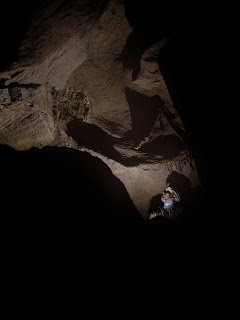 Giving Jacob, Buford and myself a different section to work on we split up heading back in the direction of the cave to work on profiles for the already surveyed passage. I finished before the other two and decided to dance off to where Ken, Stephanie and Brian were at. When I got there the whole group was giggling and generally acting sillier that they had been earlier in the day. It was easy to see why. They’d gotten into walking passage with great leads running off in multiple directions. Apparently Brian had scooped a little bit so I figured I could  look into what he saw so I ducked around the corner and started walking around. There was nice cave every where! It didn’t take long before Ken shouted at me for scooping so I easily concluded I needed some man power to back me up. I literally raced back through the crawls telling both Jacob and Buford to drop their sketches because they we’re going to love what we’d found. If I’d taken more than just a couple steps into that passage on the last trip I probably wouldn’t have been patient enough to wait till October to get the next trip in.
When we finally were established surveying things went rather smoothly. We hadn’t made the breakthrough until 7pm, but with that discovery, both teams seemed happy to keep surveying for another few hours. Ken worked until he got cross eye’d from trying to do plan and profile sketches while working in larger cave passage. I kept my team going after that team left so we could finish surveying a loop we’d started and by that point I felt as though I was going to get a headache. I was making silly mistakes in the book so I needed to stop. We took about 1hour 15min to exit the cave and got back to the cars around 1am with a fresh coat of frost forming on the ground. We got back to Tanya’s around 2am and stayed up for another 1.5 hours eating soup and talking about our new discoveries. I was on cloud 9. 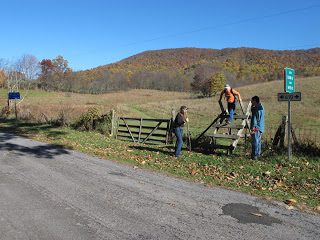 The next day we got to a slow start and had breakfast at the golf clubhouse near Tanya’s house around 10:30 am. The service was the best I’d experienced in the county, so we’ll certainly return. We didn’t feel much like caving, but did do some ridgewalking trying again to find that elusive second entrance to CS, and to try following up on a blowing lead Tanya had on the edge of the county. We didn’t find anything that day, but the weather was great, the sky was clear and the leaves were changing on many of the trees. It’d be hard to find a nicer day to wander around outside.

Early on in this project I gave myself two goals as motivation to help the project move forward. Get three teams working the cave on a single survey day, and survey over 1000’ on a given weekend. We just barely eeked out the 1000’ goal, but I’d still hope to push for three teams at some point. I’m guessing the temptation of virgin walking passage might be a nice hook when advertising the next trip. For a while now I’ve thought it would be really cool to explore a “new” cave from station A0 to something longer than a mile. There is now 4318.5 feet in the included survey length, andd with the leads we left behind I’m fully expecting we’re going to achieve that large goal. Hopefully on the next trip!

For another perspective on the trip see Buford’s trip report from the weekend at his blog onrappel.blogspot.com