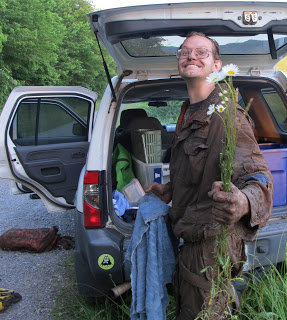 I arrived after some prep time at Carlin’s place in Durham, with a much distressed soon to die water pump in the car. After the gear move to his car, we were off. The drive up pretty uneventful, smooth sailing and a good time to eat a sandwich. Next day, we got to the cave around 930-1000. The trip in was tight and muddier than I remembered. The path seemed longer, for some reason. We got in and Carlin lead off to get some sketches while I caught up. This trip was a lot harder than I wanted it to be. Once at recovery junction, we made some plans to traverse a few points on the left, getting cross section sketches along the way. The sketching did not take long, just about 10-15 min, I assume. When done, it was back to recovery junction and off to the pit traverse. Across that, and a few squeezes later, we ran headlong into more mud. It made the slopes in there a whole lot tougher to climb. At one point, I found it easier to rely on my mechanics skills to scoot myself up the slope by hanging on the ceiling. My choice in packs for my gear at this point was becoming a pain in the… At any rate, it was the death of that one on the way out. The path onward was one full of surprises. I had some trouble due in large part to no traction from my boots. But hey that happens. The points that were needed for surveying will still have to wait until someone else does them. When there at the critical junctions, there was a lot more mud and it was tight, Carlin opted not to press on, I volunteered being there and all. But we passed on them due to the conditions of the cave. I think that was the wiser choice. We did have some fun on the way out at the section now dubiously titled Muddy Flags, all puns intended. The giant slide was the best, and the quickest way down. It got a little scary, truth be told.The next week, my ribs quit hurting about Wednesday. In closing all in all a good trip, scary at times. I’ll be ready for the next non-Cold Sink trip just as soon as I get new boots and a good gear pack, because confidentially this one was ridiculous. Sunday—That for me was Water pump Showdown. Nothing a mechanically inclined tech can’t handle. Job started about at 1500 completed 1820..No worries, just sweat and pain on sore ribs. A few cuts and a sunburn or two, nothing major, really. Just a well placed oh S*** in traffic when the pump died from being jammed. So far, no leaks.