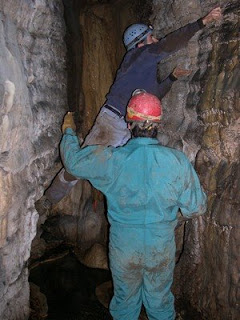 Is there a better way to start the New Year besides going caving? Ok it wasn’t officially the New Year, but it was great to go caving the first weekend of the New Year. Tanya had been compiling a to-do list; Ken, Mark, and myself made the trip from the Raleigh area to see what we could cross off the list.

A Friday morning departure was an pleasant variation. Upon arriving at Tanya’s, the landowner of a newly identified cave was contacted and we were under motion. Turns out there are at least two caves on the property (some ridge walking is probably in order). One of the landowners graciously showed us the cave; ironically a family friend, and buddies, was caving it. The cave has a pit entrance. With some quick directions we found the other cave, now named Cotton Cave.

Given the weather, time of day, and the involvement of rigging the pit we chose to survey Cotton Cave. The landowner opted to come with us, as she wasn’t familiar with the second cave and wanted to explore. Cotton cave was decorated with what I would presume to be very old formations. The cave has a small entrance but opens up to a large passage. The passage had a few low terminal leads. There is one high lead remaining; it will take some assisted climbing or a scaling pole to keep going. We completed all survey except for the high lead.

Ken found another promising lead while in transit between the vehicle and the cave. I didn’t see the entrance, but according to Ken it will require some digging and something about a jack.

While discussing caving opportunities Saturday morning, the team was split on returning to the vertical cave or doing a different cave. Weather, skill level, and other factors helped in the decision-making process; in the end safety and solid reasoning prevailed, the vertical cave would be done another trip.

Tanya had a lead on another cave in the northeast quadrant of Smyth County; we talked to the landowner and set out on foot to find the cave in the heavy fog. We split up; Mark and Tanya had found the cave. They didn’t go in due to the pile of trash at the entrance.

While Tanya and I went to find the local spring, Mark and Ken returned to the cave to determine whether to suit up and go caving. Returning from the spring we ran into Mark and Ken, apparently the cave has a penetrable distance of about 12ft. One item removed from Tanya’s list.

Next on Tanya’s to-do list was to survey Ward’s Saltpeter cave. The cave is known in the community but there isn’t a map available; there is now! Landowner notified, we set out driving around in the cow fields.

With the sun to our backs we started the survey. The main passage was a large, descending, walking passage with a jog to the right at the bottom. The cave immediately forked. It is presumed the left passage is where saltpeter was mined. To the right, water and the only formations in the cave.

The survey did not take long as the shot were typically 30ft and greater; but a great little cave to see. Another item removed from Tanya’s list.

Believe it or not, but we weren’t done caving yet. We stopped in the Sugar Grove area to survey a newly accessible cave; now to be called “The Flat” (locals claim someone lived in the cave for several years). Tanya had been in the cave and made a guess the cave would be a quick survey, well that was at least what she told us to get us to stop there.

The cave was typical for the Sugar Grove area, very random in direction and size. The cave has two immediate passages; the right most passage was completely surveyed. The left side was longer and a bit more challenging. When the leads got tight we called it a day; there are two leads left, one will end in a room, the extent of the other isn’t known though it will require several small people.

Sunday over breakfast the discussion of the days itinerary presented itself. I, of course, was hoping to get to Rowland’s; but due to the rain and the need to dig outside I quickly changed my perspective. The map of Worley’s, in Smyth County, hadn’t been completed. It was thought the effort could be wrapped up.

Worley’s a very cool cave; the front room is much more dramatic than I every figured. The next room we surveyed was very impressive as well, though a bit wetter. While checking for leads an interesting “worm” was found inside the cave. Ken’s web search found the “worms” to be larvae of fungus gnats (http://members.socket.net/~joschaper/webworm.html). As we were wrapping up the survey a short peek around the corner presented continued passage and more surveying needs.

We obviously didn’t complete Tanya’s list; there’s some very cool cave yet to survey and explore!