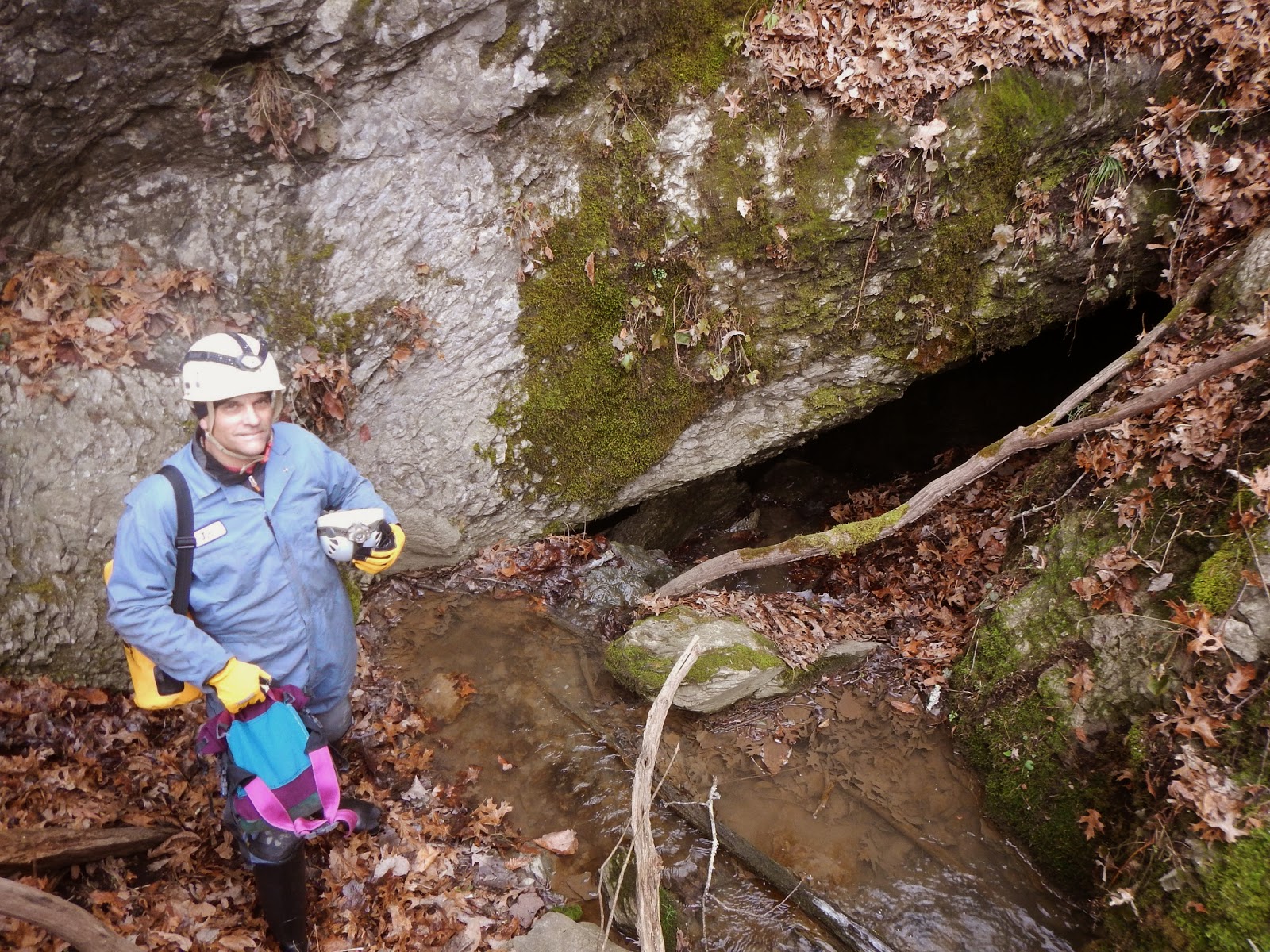 Rail Valley continues, but the real exciting potential comes after we complete the resurvey of the front of the cave. That hill has rather nice looking potential. I can promise some nice survey next trip, but the first two shots will be wet. Wet suits may be warranted. It’s going to be a fun cave and has potential to be a rather long cave! It was fair of Ken to call the trip, but I was still pretty bummed about the early exit.

Saturday I was in the same cave as Ken, but party of a totally different group. I was privileged to survey with Brian and Stephanie who are always hilarious and fun to cave with. They continue to be a great help in surveying the occasionally awful but frequently rewarding Smyth county cave passage.

Our trip involved 3 different rope drops in different parts of the cave. The first was a nuisance drop of about 15’. After our survey of this area we left one lead with the sound of flowing water, but a rock hammer will be required to continue.

The second survey area already had three unsurveyed stations set from the last trip which really helped get things started. We started down this passage then eventually handed the horizontal leads to the other team so we could drop the pit. It measured ~40’ deep. There is large passage on one side of the drop which will require a bolt climb to access. Brian tried to free climb into it without success. He was on belay, but at one point fell about 5′ directly onto Stephanie. Not one to give up, he kept trying until a large formation he’d slung easily broke off when he tried to weight it. Not good.
There is also a second stream that flows into this pit that also needs to be connected to surveyed cave.

Finally, the third area was a ~25’ rope drop. It took us a long time to figure out how we were going to rig. The top of the drop is narrow which initially made us nervous about getting suck on the climb, we exited without much effort. We surveyed a few stations to the bottom of the drop but will need to survey the room. There are a couple of bolt climbing leads here, and a going downstream lead. It was here that we found the best part of my weekend. A bunch of small clean rimstone pools filled with salamander larvae. There must have been at least 30 salamanders. So beautiful!

None of the remaining leads in this cave appear easy, but there is still a bunch of cave left to explore.
Rough current survey totals for SnoCone Cave:
Lenth: 3300’
Depth: 250’

Neither team got a ton of footage this weekend but we did add some good depth.

Than Sunday rolled around.
Dave and I wanted to continue caving. Everyone else either had to leave, or was still tired after what we’d done the last couple of days. We opted to start a new cave survey. With our main projects of the last year running out of easy work, we need to keep the survey queue filled. I’d prefer to avoid the shock we had after the Cold Sink survey finished at the same time as our other projects.

So, off to Beaver Creek Cave.
Not a lot to say yet. The survey Sunday was just Dave and myself, and we only had a few hours so it was a brief trip. Of everything we have going on, it’s probably the easiest to access, and the easiest to survey. The entrance is small, but I expect Ken will fit, and I also imagine Tanya will enjoy working this cave.
Beaver Creek survey totals:
Length: 156.7′
Depth: 26′