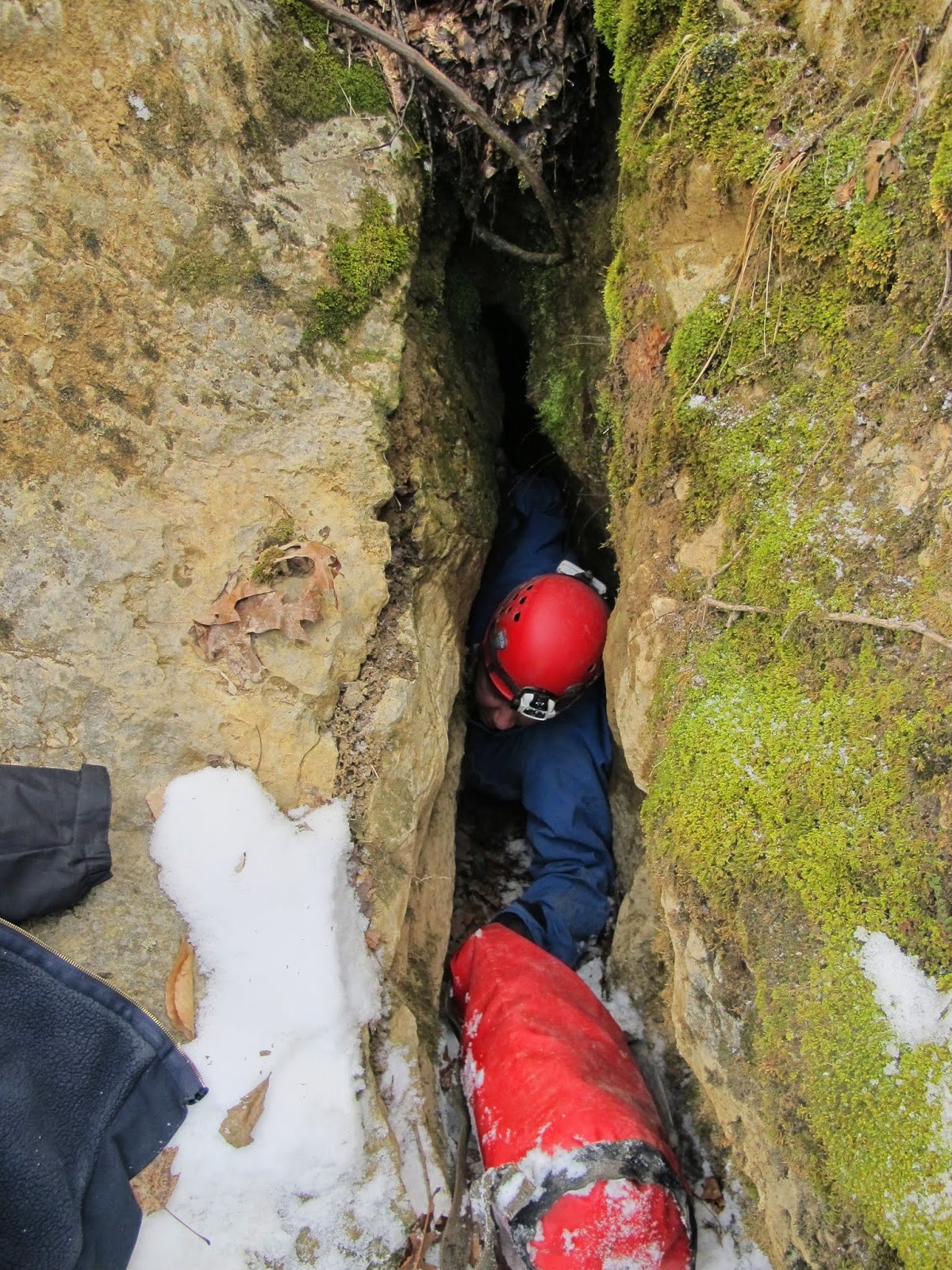 The last day of February greeted us with warm temperatures
and good road conditions. The snow had even been plowed from the Rich Valley
road nearest the cave entrance, all piled up nicely along the edge of the road.
Unfortunately the driveway down to the abandoned house wasn’t plowed.
Eventually Dave and Rob found a way to get their vehicles off the road, and we
headed straight up a snowy hillside. Best snow I had seen all year.
The entrance to Beaver
Creek Cave was just the right size for me to squeeze in sideways, but I was
less enamored by the snow melting into mud as I lay on my side. Dawson, Dave,
and I formed the first survey team, and Matthew and Rob joined Carlin on a
second. Dawson picked up instrument reading skills after just a few shots.
From the first real room, our survey led us into a
bellycrawl (of course) that opened up into crawlway with nice formations. I was
able to squeeze past the formations and continue all the way to a tight dead
end at the back. As I waited for Dave and Dawson, I noticed that I was in a
much colder room.
After regrouping, we headed into the big room that Carlin
spent a good part of the day sketching. We set a station that Rob quickly
coopted, so we just started our survey a little further down. We surveyed
nicely decorated walking passage this time but had to step past the pits to a
lower level. Around a bend Dawson found the Circus Bear Pit down a small hole
in the wall.
Dawson tried to explore the pit, but his dad claimed dibs.
As I belayed Dave down Circus Bear Pit, I noticed that this room also felt
quite chilly. Apparently every lead I was finding led us closer to the snowy
hillside. After completing our survey, Dave and Dawson learned how to use their
camera while I poked down to the lower level. It should be fun to survey the
interlocking passages down there.

Dave and I also looked up the passage where the other team
would survey and heard serious running water. The other team told us that it
led to a major pool of water that may have been twelve feet deep.

On Sunday we took a sport trip to Cave Ridge with Tanya
McLaughlin. I went first into Boxwork
Crystal Cave and showed everyone why the cave is misnamed. Cameras were
pulled out, so we spent some time there. While everyone was exiting, I ran over
to Radon Cave just far enough to
find out that it still seems to be quite open and had not silted shut.
We then spent the rest of the time in Dead Air Cave. The horizontal entrance treated us to a good number
of ice formations as far as twenty feet inside. However, I think everyone liked
the big room with the spectacular formations, natural light from the pit
entrance, salamander efts, and tiny crystals. Carlin and Dave promised they’d post photos to go along with this trip report, so be sure to check out the blog site directly.
More photos of the weekend available here.
https://plus.google.com/photos/111606262660193613275/albums/6122219634386052049