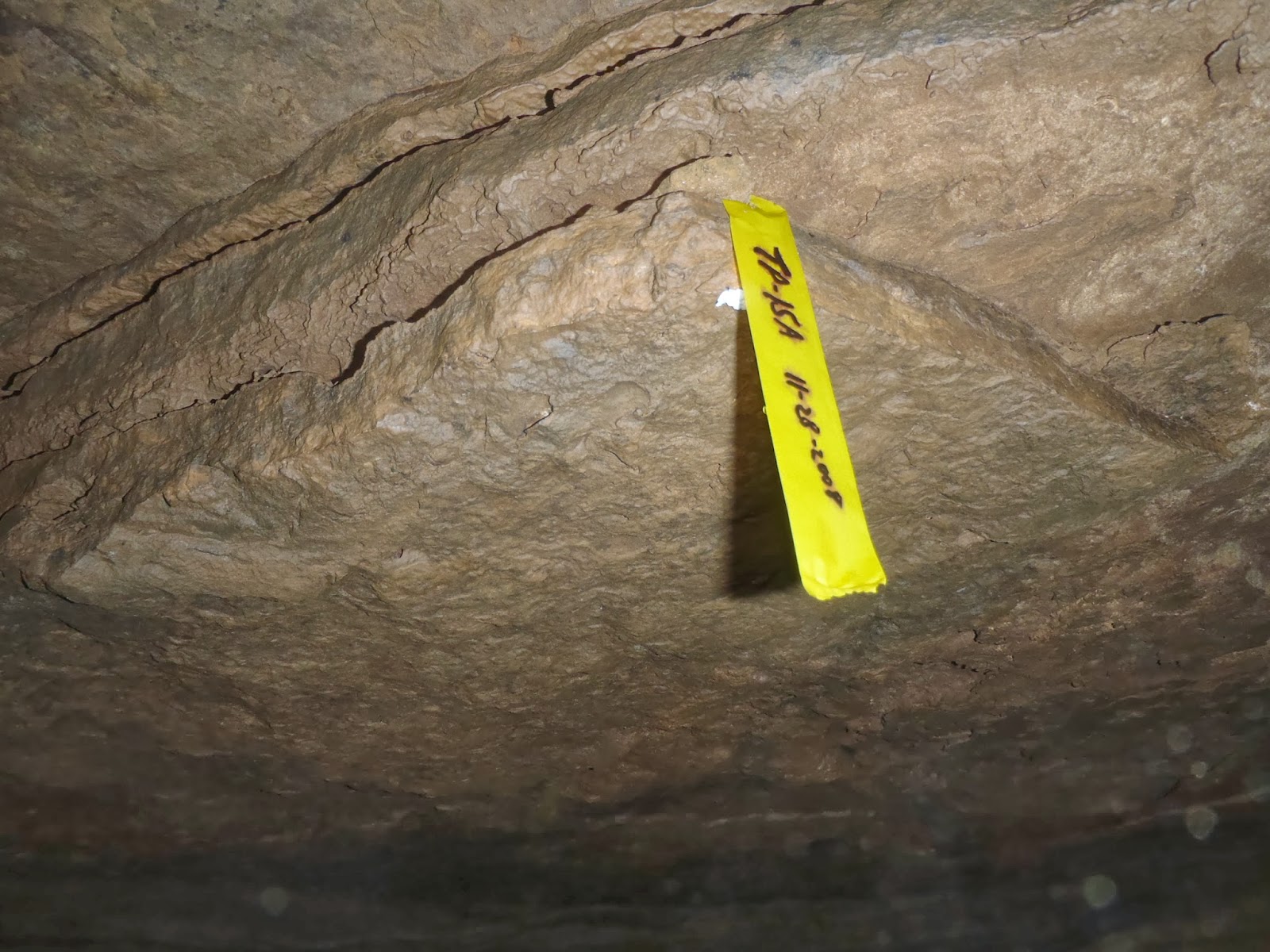 Participants: Jason Lachniet, Bill Grose, Emma Buchanan, Julie Slater, Carlin Kartchner
Bill, Carlin survey (BC): 475’ (mostly virgin?)
Leads killed: TP15A (both) and TP18A? (potentially still a lead at TP18A), one of two leads at E30.
Leads generated: none
I have mixed feelings about cave re-survey. Part of the thrill of cave survey is the chance to document something no human has ever seen before, but if someone has already “surveyed” a cave that puts a slight damper on the motivation. Having heard that Perkins was being resurveyed I figured I’d join in on a trip because I knew getting into that cave often involves jumping through a few hoops. Knowing also that nearly 10 miles were mapped in the original survey had me skeptical there would be much low hanging fruit. Turns out I was wrong.
I drove up early Saturday morning partially in hopes of avoiding bad weather we’d had on Friday, but I still got more than I wanted. It was sunny, but between Greensboro and Winston-Salem there was a lot of ice, and I may have passed more accidents that morning than I’d passed in total in my life before this trip. Needless to say it was a bit unnerving, but soon after I’d decided I was going to call Jason and head home, things started clearing up, and after around Pilot mountain things cleared up so much so that most of Virginia seemed relatively dry with no snow or ice seen anywhere. Ultimately I met up safely with everyone, we piled our gear in Bill’s truck and we were off.
The cave was as expected, very beautiful, and had a pretty friendly route for the 45 min it took us to get out to our leads. Once there we split into two small survey groups, but were working fairly near each other. My team was just two people consisting of myself sketching and doing foresights while Bill set stations and

read backsights. We started with a side lead that was basically just a debris blocked passage parallel to the 200’ crawl on the old trade route. This wasn’t too interesting until we made a voice connection with the other team. We found by moving a few rocks we were able to make a tight surveyed connection to the other team. Pretty cool.

After working that lead Bill and I returned to our main lead which had some beautiful gypsum crusted passage just below us that was perhaps 10’ wide and 15’ tall. We were excited the whole day about surveying it, but we never got to it. Bill explored a lead on the other side of the down climb into that canyon which he thought we’d finish in 3 stations. Ha ha ha ha ha ha ha…
All it took was moving a couple rocks and Bills upper level crawl kept going. We ultimately made a couple loop closures and killed a few leads which we connected to in another part of the cave. It was pretty thrilling and it’s highly likely that most of that area was virgin. It was all low crawling, but never was it terribly uncomfortable. Most of the survey shots were easy to sight in both directions. We surveyed everything in our area leaving no new leads, but never did get to that canyon passage. Even though Bill and I still had the energy to keep going we had a relatively early call out time so we packed up and headed out around 9pm. This was fine as I was still tired the next day though that may just be because I forgot about the DST change when I set my alarm.
After the trip everyone else who lived relatively close headed home while I headed to my favorite field house, Tanya’s. She’d opened her home for me and even made me breakfast in the morning which I thought was especially kind. It was nice to be able to hang out for a while one-on-one since I’m usually over there with a relatively large party. The downside to being there without other Trogs was that Bo could not be handed over to someone else so I spent a lot of time petting that demanding beast. Possibly the hardest thing I did all trip. It was a good weekend.
In summary, consider carpooling up to help on this project next time I go up. I think you’ll find surveying in Perkins worth your time. To find out how the other survey team did, a trip report is expected be posted to the Walker Mountain Grotto’s blog soon. http://walkergrotto.wordpress.com/
All photos taken by Bill Grose and used with permission.