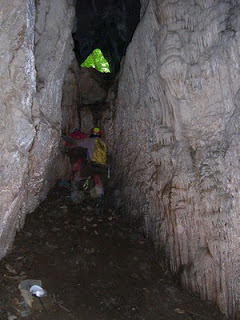 Sunday morning was a bit of a mix-up, the restaurant we were to meet Robbie as was closed due to a family emergency. It took a bit to get things straightened out, and was soon at the property talking to the landowner. His brother and himself were outside; they both are very friendly and supportive of our effort. He is very appreciative of the work we are doing to clean up and protect his cave. Both have plenty of stories about caving in Rowland as boys. That cave has real significance and memories to both of them.

We started the survey from the lower level; near the cable ladder climb, as it has become known. In some of the breakdown there was a hole in the floor, which led into tall canyon-like passage. The passage is actually the continuation of the canyon before the cable ladder climb. It was not noticed as such previously due to the amount of suspended breakdown. The canyon continued until reaching a short climb to the right (and a dead raccoon to the left).

The climb looked very promising; at the top of the climb the cave T’ed. The right passage was one terminal shot, darn. To the left, we were presented with another entranceway into the big room we started to survey on the last trip. The survey continued into the big room. It was nice to complete the big room and to knock off two leads, but disappointing the leads didn’t continue on. In the big room there is one lead that was not surveyed. This lead will require vertical gear; it is a pit. The stream can be heard from within the pit; while the bottom was not visible the depth the streambed would be estimated at about 25ft below.

We ventured to the upper level to check out three other leads; one lead was declared not safe to attempt with the current equipment with us and will require another try, with a 12ft ladder. The other lead did just as I suspected, looped back into a lower room we had previously surveyed. The last lead wasn’t really a lead, we knew the passage; the brothers used to traverse a rather creepy pit. The passage leads to the big room below. We surveyed the small section to add to the map for completeness.

Much of the cave surveyed was not nearly as decorated as other portions of the cave. However, the cave continues to impress me; it is not a long cave but has tremendous volume given the two large rooms. I remain optimistic the pit will provide more passage, only another survey trip will reveal the truth.