By Louis Le, on the occasion of his first wild cave trip, and first adventure with pun and gear masters Mark and Andy.

The road was quiet and the morning already warm and sunny as Andy, Mark, Susan, and I walked silently to Hancock Cave.

We cautiously snuck by a house supplied with potentially lethal chihuahuas, holding tight to the emergency dog treats generously supplied by Tanya in case things got ruff. Never hurts to be prepared, gotta account for the paw-sibilities.

After a successful stealth mission and a careful trek in the woods, making sure not to take the wrong root, we arrived at our destination: Hancock’s entrance! A last minute bathroom break, a pre-caving pic, and we were ready to make our descent!

Mark fashioned webbing into a hand-line to help with the descent as it had rained the day before. It was a somewhat steep and slick drop from the entrance as we entered one by one. The line definitely helped as it was quite muddy on the way down, but after a bit of careful stepping and controlled sliding, I made it all the way down.

After reaching the bottom, a gorgeous cave salamander greeted Susan and me. It was orange with black spots and quite min-newt!

We journeyed up a small climb before we reached another tricky descent. Mark came to the rescue again with his rope skills as he used a carabiner, two slings, and a few alpine butterflies to create an impromptu ladder. (Both Mark and Andy had forgotten to bring the etrier from the car.) Knot rocket science, but I taut it was quite resourceful!

The second descent led to the “Grand”-tham (Grantham) room. As the name implied, the room was rather massive, big enough to house maybe one or two half-inflated hot-air balloons. (Or a dozen half-funny puns.) I honestly did not expect the room to be so large given how small the entrance was. Further exploration led us to the Octopus Room with eight different possible paths- luckily there was a nicely placed cairn next to route we came from as getting lost would not be tenta-cool.

Continuing on, we passed the Broken (Breakdown) Staircase, which looked like massive pieces of piled up blocks, each roughly the size of a flattened Smart Car. I found them to be quite uplifting.

We came to a point in the cave with a steep climb. Mark climbed up with no issue, but the rest of us found the mud to be quite slick, so after a few attempts, the rest of us decided to go a different route and crawled in a dried-up stream. I was super thankful for my knee-pads as the stream was littered with jagged rocks. After what felt like a few minutes of careful maneuvering to avoid unnecessary deep tissue massages, I was relieved to get to the other side. The overall crawl was only about 30’… but felt like a nice achievement as my first cave crawl!

We eventually made it to the comic book hole! Only problem was that it was around ten feet off the ground! Now it was Andy’s time to shine! Using his height and his trusty left shoulder, I stepped up and wormed my way top half into the hole arms first. From there, I momentarily got stuck, took a much-needed thirty second break, and wriggled my way through the hole.

I was glad that there was another way around as coming back out the hole would have been incredibly difficult! Susan then gave it try while Andy, who was also doing great photography work, snapped an incredible shot of her legs sticking out of the hole. 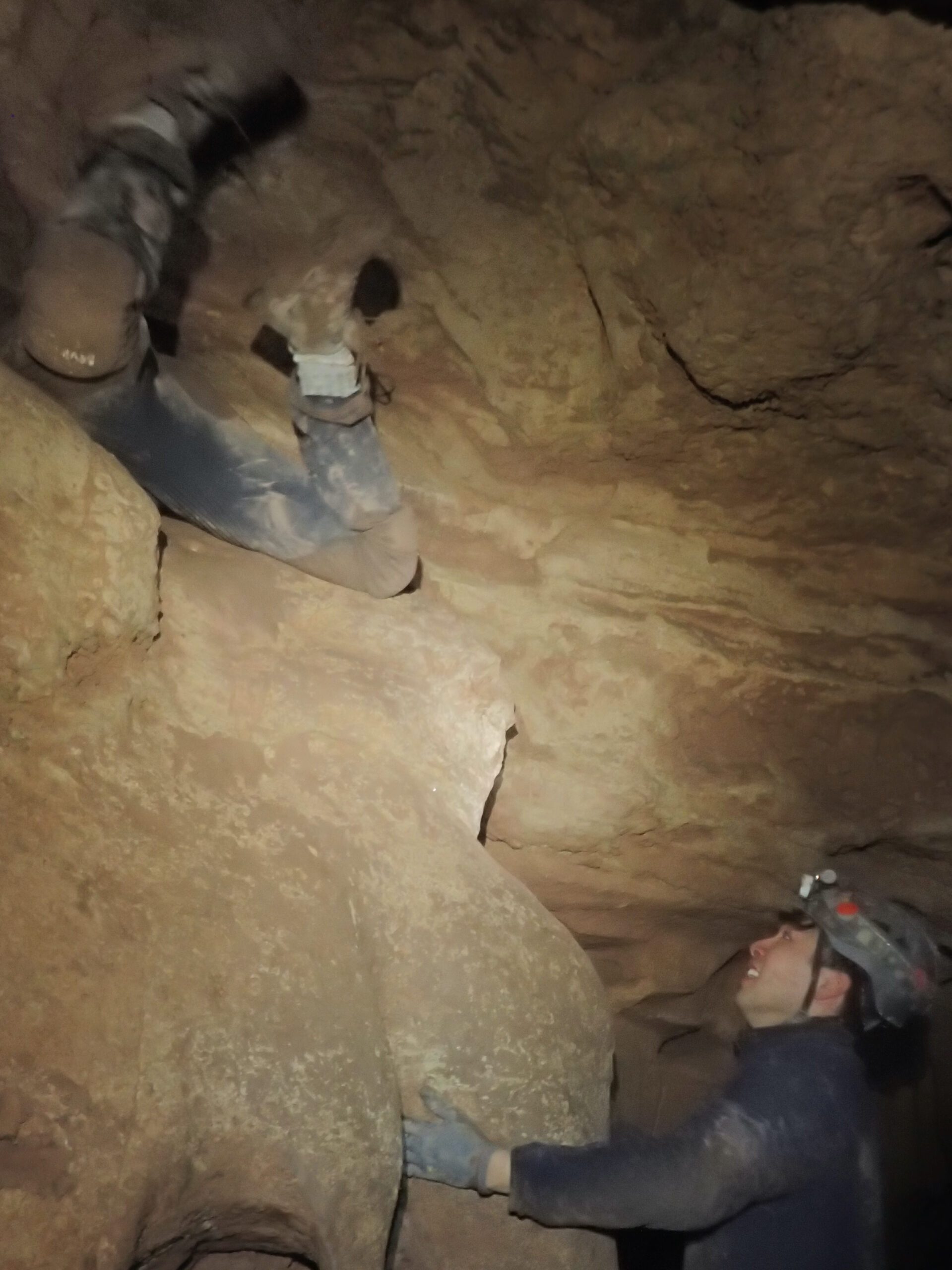 Calling it a fun day of caving, we decided to head back out, retracing our steps. Seeing the Broken Staircase again elevated my mood. Identifying the cairn again in the Octopus Room kept me calm-ari. Finally we were bottom of the entrance and could see the light at the end of the cave!
Susan went first and made the climb look so easy. I went afterwards thinking it would not be too bad as I gripped the sling. I took a few steps, then like losing Jenga tower, I slowly teetered over and splat into the mud. After a few more humbling slips and slides I finally made my way up and out of the entrance.

It was my first time caving and I’d heard about the mud…but man was there a groundbreaking amount of mud! If the camera didn’t add ten pounds to our post-caving picture, the mud definitely did! Our time in the cave was not too long, we entered around 10 AM and left at 4 PM, but I had a blast! Thank you to Mark and Andy for their guidance and their unending puns. They were puntastic!